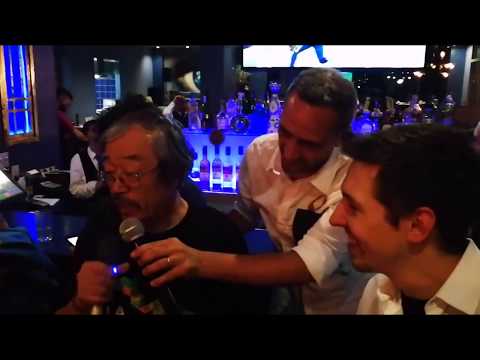 From the journalist who claimed Dorian Nakamoto was Satoshi: "Bitcoin is being monitored by an increasingly wary U.S. government". Apparently Bits-Coin is unstoppable terrorist fuel and not a fragile scam you can make unusable with $1000. If only the NSA had $1000 on hand!

An open message to Satoshi Nakamoto: Not that long ago you wrote on the forum "I am not Dorian Nakamoto". Any chance you could now write "I am not Craig Wright"? /r/Bitcoin

I do believe Dorian Prentice Satoshi Nakamoto IS the creator of Bitcoin, and I think /r/bitcoin is in denial big time.

I know it sucks that someone comes out of the blue and suddenly breaks all the magic and ruin the party. What Leah Goodman did is like as if a child was watching a magic trick and Leah suddenly interrupts the magician half way through and reveal how the trick is done. Like, wait... I didn't even ask you to...
I think this community in general either has big trust issues or is in denial. I can understand why, first it's way cool to have its creator to remain an anonymous figure and to keep thing this way, and second, knowing that he has made it very clear through his behaviour in the past his desire to remain anonymous, it kinda feels like we as a community has this duty and need to protect him, to keep other people from revealing his identity, and if someone gets through this barrier, this someone then becomes an enemy and it almost feels as if we are part of a failure.
I love Bitcoin, I trade them, I read about it almost 24hrs, I'm obsessed with it but let me tell you, boy do I hate /bitcoin sometimes.
Dorian says: "I am no longer involved in that and I cannot discuss it," and "It's been turned over to other people. They are in charge of it now. I no longer have any connection." / "She is lying! Newsweek bad! I don't believe it!"
then he says: "I got nothing to do with it," / "I told ya! That's the proof. Case closed! Newsweek failure!"
Then even if tomorrow Dorian comes admitting and proving he is the creator, you'd still hear: "This old man is delusional. You know what, this man is so sick of media harassing him, that it's better for him admitting he's Satoshi so just people can get over it and leave him alone."
Or even if you'd see a post of him on bitcointalk.org admitting: "Oh, that's clearly a hacker messing with us!"
I think it's a good thing that Andreas is fundraising for him, I know many people here are gonna donate while telling to themselves "Yeah I'm gonna donate for this poor man who's been harassed by the media", but there at the back of their heads they're thinking: "Well, you know, JUST IN CASE this guy is really Satoshi, here's my contribution to show my appreciation for this wonderful invention."
"But yeah, fuck Newsweek!"
Anyway, to finish I think Leah fits well with that Jeff Bridges meme. She's not wrong, she's just an asshole. But hey, that's what journalists normally do, right?

Owner of one of the first businesses to accept bitcoin in 2011, claims to recognize Dorian 'Satoshi' Nakamoto's picture in the NewsWeek article as that of their first customer to pay using bitcoin

https://news.ycombinator.com/item?id=7354326
Tell HN: Meeting Satoshi
163 points by yuxt 10 hours ago | 98 comments
back in 2011 I convinced my wife who ran a small creperie in DUMBO, Brooklyn to start accepting bitcoins. We were one of the first in the world physical location that accepted this new digital currency [1]. In the next couple of month we received a lot of attention, but no one has purchased anything with btc. Then one day, my wife calls me and informs that there is someone who would like to pay with bitcoins. I got excited and asked her to take a picture of the guy because he is the first one and it's a historic moment for us. He bought 2 crepes and paid using his smartphone and our QR code with btc address. One crepe and a lemonade was 1 bitcoin at that time :) After he finished his food my wife approached him and asked to take a picture of him for being the first. He blushed and politely declined citing that bitcoin is an anonymous currency. He wished us well, added that bitcoins should already be in our account and left.
My wife called me back and revealed that he refused to take a picture. So I asked her to describe him. She portrayed the guy as a humble polite Japanese man in his 50s. We joked maybe it was Satoshi, but I dismissed the idea. I assumed it was some one from Mt Gox since it was located in Japan.
Today I showed the picture of Satoshi in Newsweek to my wife and she recognized him.
http://bitcoinbabe.blogspot.com/2011/07/bitcoin-sex-drugs-and-baklava-and.html

The latest (good/bad?) news is that Newsweek's Dorian Nakamoto very likely isn't Satoshi Nakamoto, the $400 million creator of Bitcoin. The good news is he can probably sue Newsweek and end up with $400 million!

Real Satoshi Nakamoto using his original login address at a website says he isn't Dorian Nakamoto.
http://p2pfoundation.ning.com/forum/topics/bitcoin-open-source?commentId=2003008%3AComment%3A52186&xg_source=activity
Dorian Nakamoto's life being ruined in less than 10 hrs as a result of the Newsweek story and posting his home address on it's national news page.
http://www.reuters.com/article/2014/03/07/us-bitcoin-inventor-idUSBREA252D820140307

[Serious] Why doesn't Satoshi use his email to confirm he's not Craig Wright, like he did last time with Dorian Nakamoto? /r/Bitcoin

Regardless of who the real Satoshi Nakamoto is, the Bitcoin community should step up to raise some funds for Dorian S. Nakamoto

I don't know the best way to crowdsource this, but I would gladly donate 0.015BTC to a fund for Dorian Nakamoto, to help him pay for medical treatment, or a legal fund to take whatever actions against the media he may wish to, or whatever he wants to spend it on. This would be good for bitcoin for several reasons: 1) it is a great way to re-direct the story and bring positive media to the bitcoin community. 2) If he is the real Satoshi, then we all owe him a big one. 3) If he's not the real Satoshi, then it would really be kind for the community to support him after he so obviously unwillingly got wrapped up in this (because Newsweek sure isn't going to!)
What do people think?

What would you think if Satoshi Nakamoto donates his bitcoins to Dorian S. Nakamoto?

Is the Craig Wright story an elaborate ruse designed to get the real Satoshi to post another message on P2P foundation, like he did with Dorian Nakamoto? /r/Bitcoin

Dorian Satoshi Nakamoto thanks bitcoin community: 'I want to hug you'

Isn´t it the most amazing headline our community could have? Each adress could receive 5 or 10 bitcoins as a reward for its goodwill! Plus: -Mídia exposure to the moon -Amazing reward for a engaged and sensible part of the bitcoin comunity -Great incentive for more community engagement -Great incentive to future donations. -I would keep a smile in my face for several days.
Ok, at least let me dream about it...

How the Hunt for Satoshi Turned Dorian Nakamotos Life Upside Down: the Inside Story /r/Bitcoin

BITCOIN - Before They Were Famous - Satoshi Nakamoto SUBSCRIBE: http://bit.ly/2z9TmzZ INSTAGRAM: http://www.Instagram.com/McCruddenM **** MORE VIDEOS YOU WIL... this is all viral marketing for dorian nakamoto's upcoming hip hop album "cookie train, bitch" do not buy into the media shills Check out my other channel TopTenz! https://www.youtube.com/user/toptenznet →Subscribe for new videos every Monday and Thursday! https://www.youtube.com/c/bi... In this 5 minutes, you are going to know pretty much all about Crypto Currencies and Bitcoins. What are Bitcoins? How do they work? Their Past to their futur... Bitcoin's creator satoshi Nakamoto has remained a mystery, until today. Music Used White Bat Audio - Dark Synthwave - Eternal Night (No Copyright) Cinematic ...